“I wish to remind everyone…that the comforts we have, the peace we have, and, most important, the faith and knowledge of the things of God that we have, were bought with a terrible price by those who have gone before us. Sacrifice has always been a part of the gospel of Jesus Christ. The crowning element of our faith is our conviction of our living God, the Father of us all, and of His beloved Son, the Redeemer of the world.”
– President Gordon B. Hinckley

I have ancestors that I honored as I trekked along forest roads October 2016. One close ancestor, my great great grandfather, is Isaac Alldredge II, who was an orphan at age 5. He says in his autobiography, “In the fall of 1852, my Uncle John Brown, Mother’s youngest brother, came to Illinois from the great Salt Lake Valley, west of the Rocky Mountains, now the State of Utah. He had joined the Church of Jesus Christ of Latter Day Saints, and was one of the first company of pioneers to Salt Lake City in 1847.
“Early in the spring of 1853, I left Illinois with Uncle John and went west. The first 60 miles I rode a mule to St. Louis, Missouri, took a steam boat from St. Louis up the Mississippi River to Keokuk, Iowa, then by ox team through Iowa, Nebraska, and Wyoming; and arrived in Salt Lake Valley in the fall (Sept. or Oct. 16). During the following winter I went to school in the 14th ward, Salt Lake City.”

He was a faithful and contributing member of society for 93 years!
   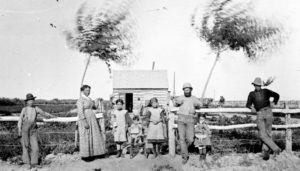 Isaac is the dad here with the hat right of center. His sweetheart is Susannah Evans and these are a few of their kids. They had ten children, three of which died when they were young children.

Their sacrifices and hard work to colonize and settle in the west has given me the heritage and conveniences of life that now enjoy. Hoorah! Hoorah! Hoorah for Israel!

Decluttering Pioneer Style:
Between the years 1856 and 1860, 10 handcart companies would make the journey west by pulling and pushing handcars. Five people were assigned to a cart. Each individual was allowed 17 pounds of personal items including clothing and bedding.

A member of the first handcart company of 1856, Mary Ann Jones wrote: “Some wanted to take more tan the allotted portion and put on extra clothes; thus many who were real thin became suddenly stout and as soon as the weighing was over, put their extra clothes back on the handcarts. But that di not last long. In a few days we had to have all weighed again and many were found with much more weight on the cars than allowed. One old sister carried a teapot and colander on her apron string all the way to Salt Lake. Another carried a hat box full of things, but she died on the way.”

What would I die carrying across the plains? Hmmmm. Probably our piano. Hahahah! Can you imagine me pushing that thing over the rocks! 🙂 I would die for sure.

First-time Campers Pioneer Style:
Of nearly 3000 saints that traveled by handcart, most were new members of the church emigrating from the foreign lands of England, Wales, Scotland and Scandinavia. There were more women and children than men. Most traveled in families, but there were also many that came alone in hopes of joining family that had preceded them or to establish a home for family that would follow. Many were middle class citizens, but the majority were poor folks. Many did not speak English and were unfamiliar with the hard life of the frontier. Most of them had never pitched a tent, slept on the ground, cooked outdoors or built a campfire.

Peter McBride wrote: “it was quite an undertaking to get nearly 600 persons who had never had any camping experience to travel, eat, and cook over campfires. It took much patience from the captain to get them used to settling down at night and to get started in the morning.” I wonder if they loved camping more than they thought and wanted to stay up chatting, singing, and laughing around the fire. That is the funnest part for me. Camping is really quite fun! (If you aren’t sick, freezing, and hungry.)

This unlikely band of pioneers didn’t have frontier experience, but they had burning testimonies of Jesus Christ, an unquenchable desire to gather with their fellow Saints and Faith that their Heavenly Father would see them through as they followed a living prophet. This “Spirit of Gathering” was a God given, timely motivation for the saints at this time.

Elder Bednar taught the purposes of “The Spirit of the Gathering”:
Purpose #1. To worship
“And there was one day in every week that was set apart that they should gather themselves together to teach the people, and to worship the Lord their God, and also, as often as it was in their power, to assemble themselves together” (Mosiah 18:25)

Purpose #2. To build up the Church
“Again, verily I say unto you, I will show unto you wisdom in me concerning all the churches, inasmuch as they are willing to be guided in a right and proper way for their salvation—

“That the work of the gathering together of my saints may continue, that I may build them up unto my name upon holy places; for the time of the harvest is come, and my word must needs be fulfilled” (D&C 101:63-64).

Purpose #3. For a defense
“And that the gathering together upon the land of Zion, and upon her stakes, may be for a defense, and for a refuge from the storm, and from wrath when it shall be poured out without mixture upon the whole earth” (D&C 115: 6).

Purpose #4. To receive counsel and instruction
“And it came to pass after many days there were a goodly number gathered together at the place of Mormon, to hear the words of Alma. Yea, all were gathered together that believed on his word, to hear him. And he did teach them, and did preach unto them repentance, and redemption, and faith on the Lord” (Mosiah 18:7).

He concluded this talk at BYU Idaho in October 2006 with this warning and blessing:
In the authority of the holy Apostleship, I now raise a voice of warning and I make a solemn promise. If the day ever were to come that intellectual arrogance, a lack of appreciation, and a spirit of demanding entitlement take root on this campus—among the students, the faculty, the employees, the administration, or within the community of Rexburg—then in that day the Spirit of Ricks will be well on the way to being extinguished—and the heavenly influence and blessings that have prospered this institution and the people associated with it will be withdrawn. Conversely, as long as intellectual modesty, humility, gratitude, obedience, and frugality continue to characterize those who learn and serve at Brigham Young University–Idaho, then this university will shine forth ever brighter as a beacon of righteousness and of inspired educational innovation.

This warning is instructive to us as well. I love this counsel!

TODAY:
Today we have been commanded to seek and can be greatly influenced for good by “The Spirit of Elijah.” In the Encyclopedia Mormonism, Mary Finlayson wrote, “For members of The Church of Jesus Christ of Latter-day Saints, the spirit of Elijah is the spirit of family kinship and unity. It is the spirit that motivates the concern to search out ancestral family members through family history; and, on their behalf, to perform proxy baptisms, temple endowments, and sealing ordinances (Hc 6:252). This is seen as fulfillment of the prophecy of Malachi that in the last days Elijah “will turn the heart [in Hebrew, the innermost part, as the soul, the affections] of the fathers to the children, and the heart of the children to their fathers” (Mal. 4:5-6).

“The appearance of Elijah to the Prophet Joseph Smith and Oliver Cowdery in the Kirtland Temple in 1836 inaugurated anew this spirit (D&C 110:13). The spirit of Elijah is active in the impetus anyone feels toward finding and cherishing family members and family ties past and present. In the global sense, the spirit of Elijah is the spirit of love that may eventually overcome all human family estrangements. Then the priesthood power can bind generations together in eternal family relationships and “seal the children to the fathers and fathers to the children” within the gospel of Jesus Christ (WJS, p. 329).”

I have been effected by the Spirit of Elijah and by engaging in this divine work, the blessings of joy and protection with surely come as they are promised. I encourage you to open an account on FamilySearch.org to learn about the pioneers in your life. We are all part of God’s family and He wants these records to be organized and each family member to be sealed His.