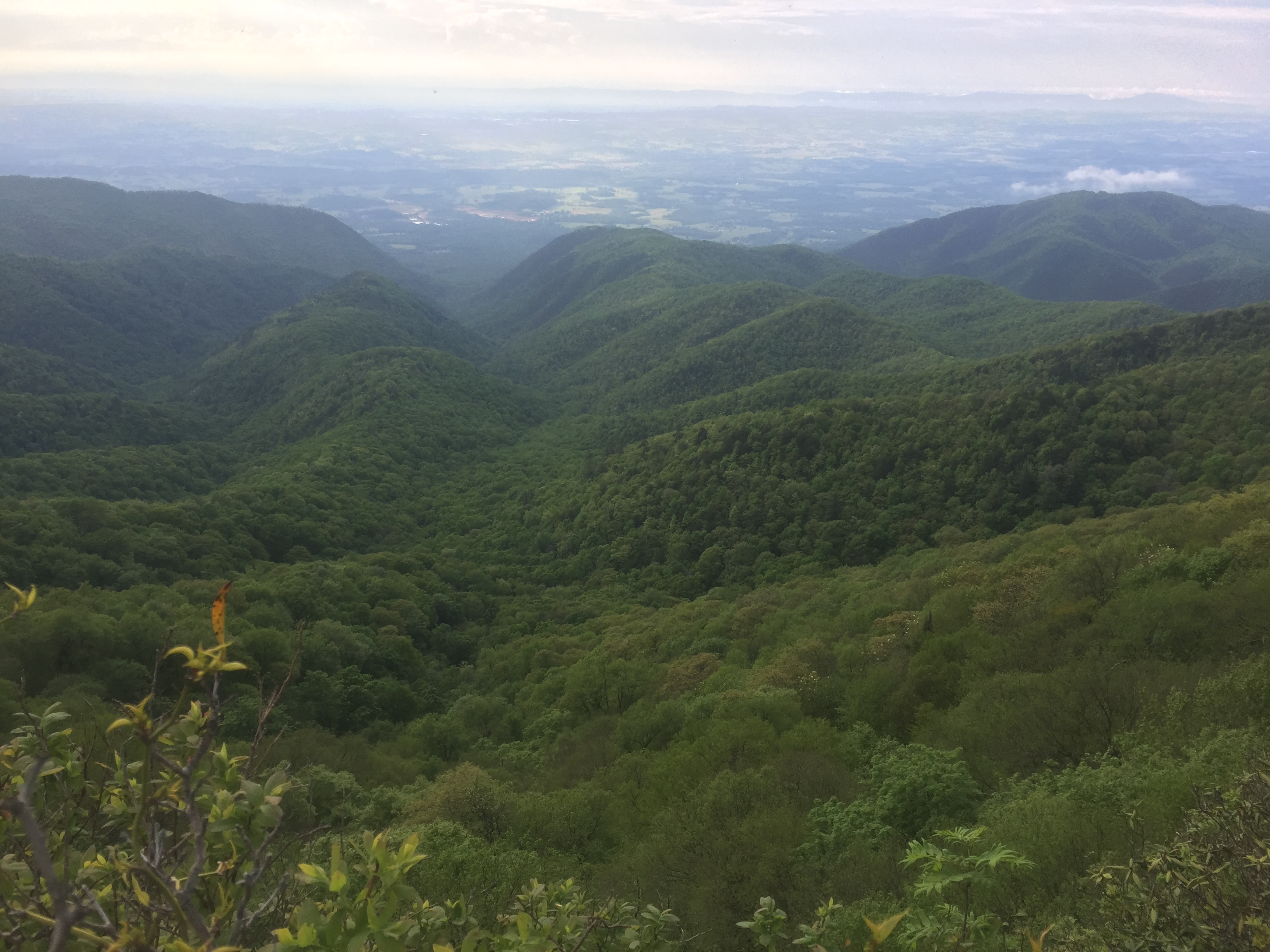 J.D. (More commonly know on the trail as “Gigante“) has been having a real adventure these past couple of weeks including sickness, new friends and amazing sights.

When J.D. called a few days ago, to tell me that he was exhausted from vomiting and diarrhea, I naturally was concerned. We kept in touch over the course of two days, which were uncomfortable and discouraging for him. In the end it was determined by his symptoms and gathered information, that he had Norovirus. This virus is highly contagious, thriving in close quarters such as hostels. CLICK HERE for more info. After taking it slow a few days and getting his energy back up he is doing FANTASTIC!

Deer are a frequent companion on the trail. They don’t seem to be phased by hikers, since they will get as close as 10 – 20 feet from them. 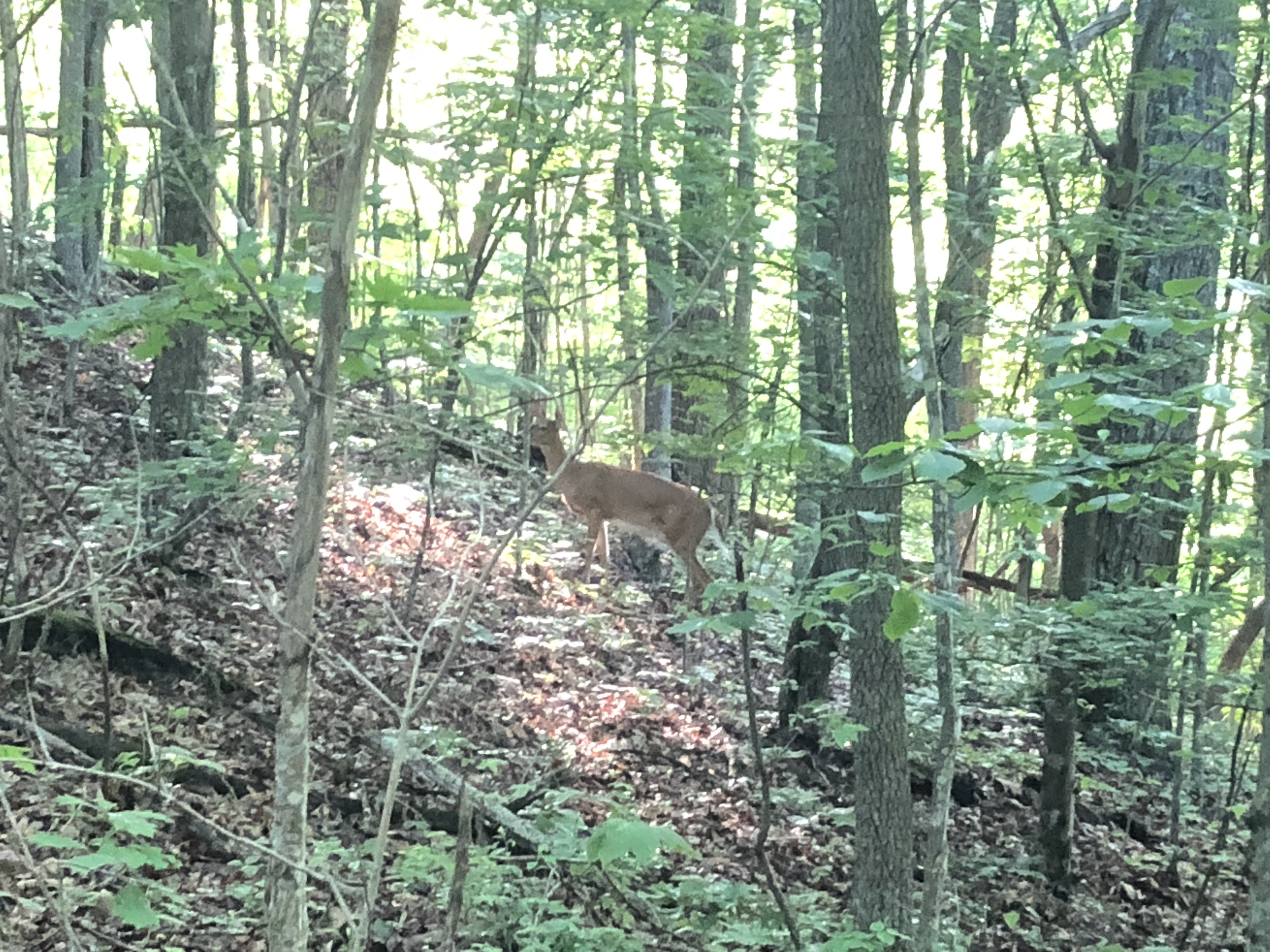 This quarter point sign is the formal and exciting evidence that you are 1/4 of the way through the journey. there is a hostel nearby cleverly named “Quarter Way Inn.” 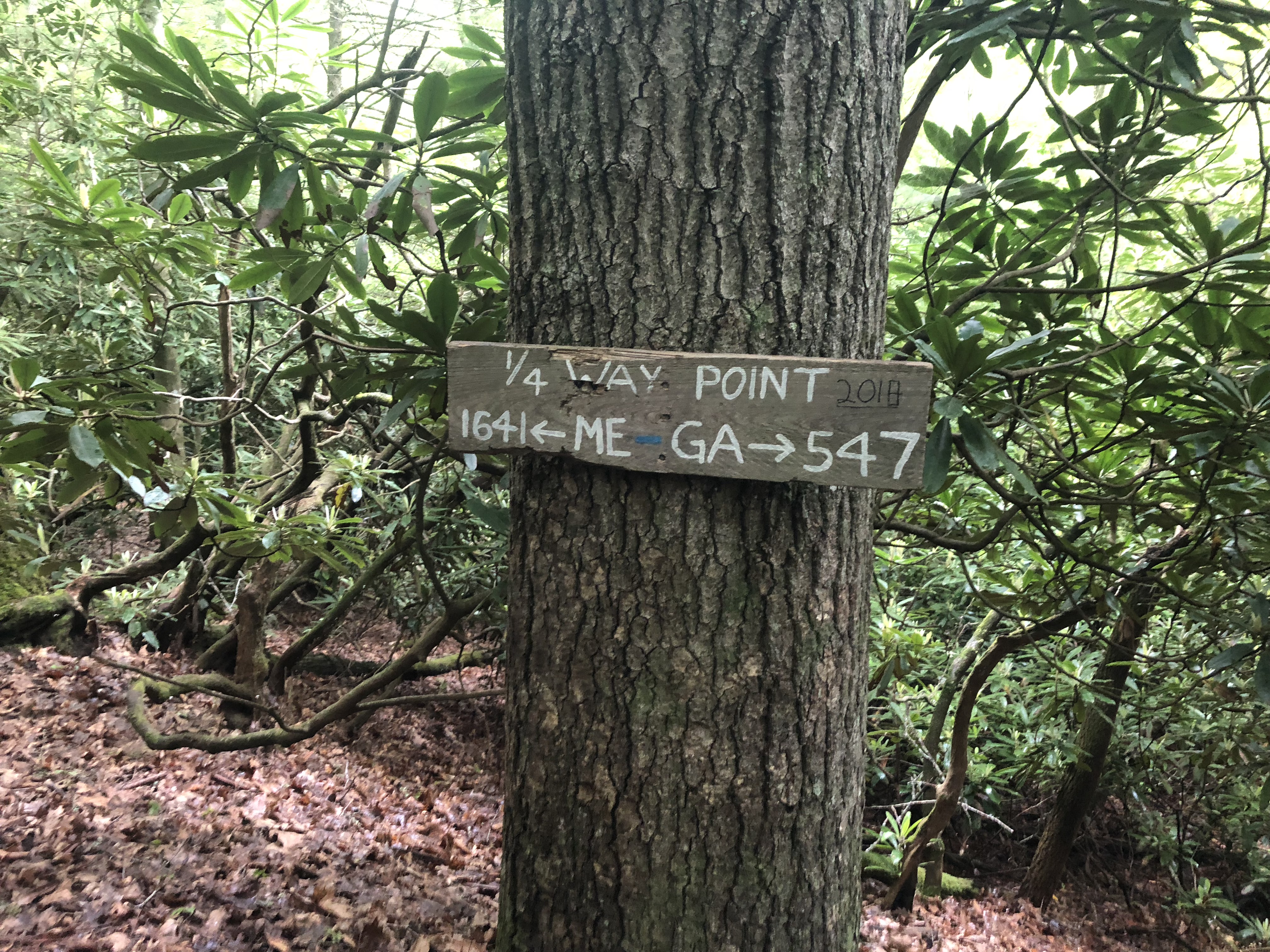 Seeing this rabbit on the trail reminded J.D. of childhood stories I have shared about raising rabbits for a couple years. My Alldredge grandparents were the pros, though. It was at their home that I ate my first BBQ rabbit. 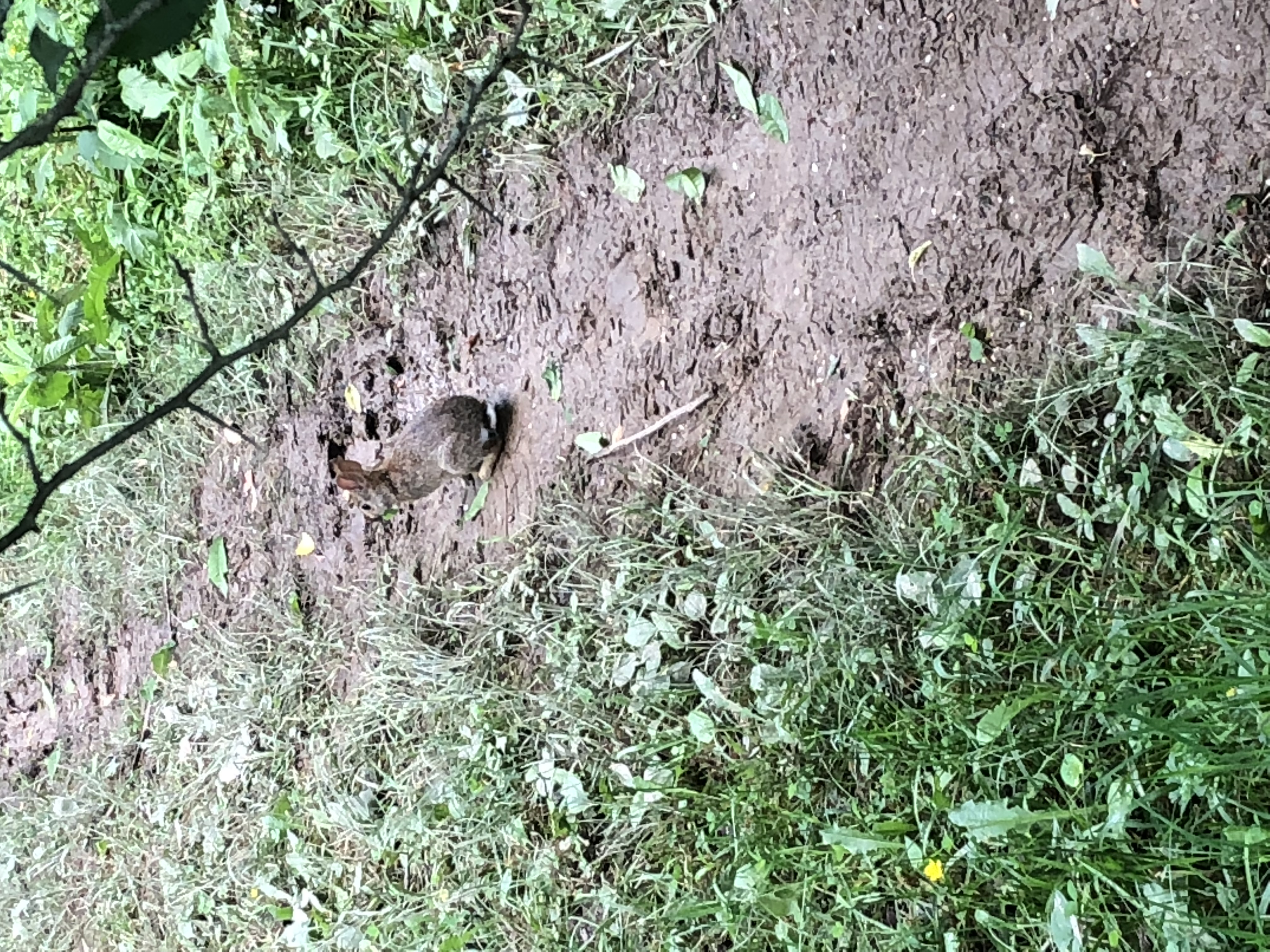 J.D. says, “I have seen lots of flowers. This is a nice grove of them.” 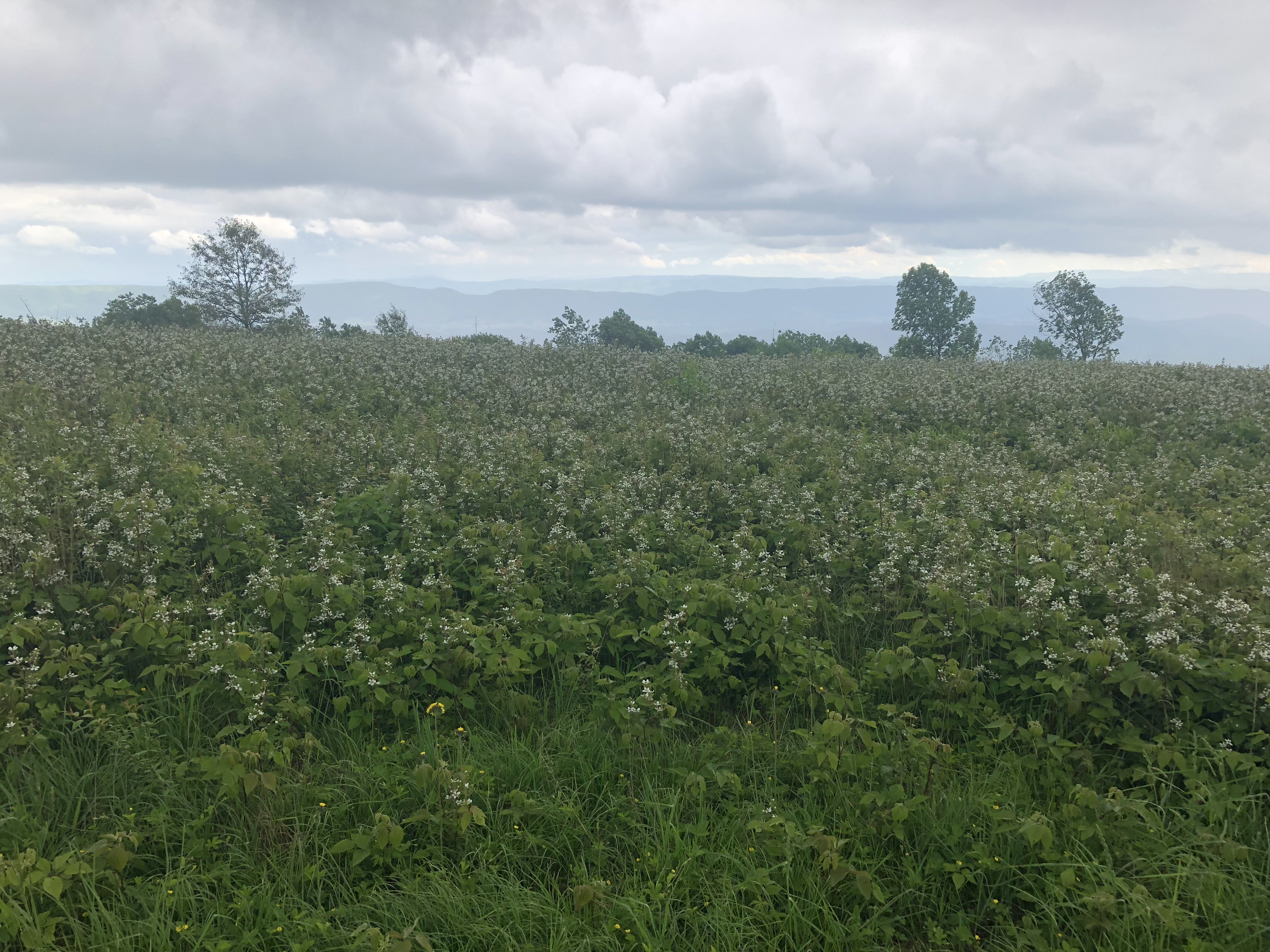 This unique shelter had 4 walls and a door! (Before I got sick) The inside was painted white so you could see the graffiti very clearly. Some funny hiker had drawn outlets with a sharpie and a light switch. “Obviously there was no light switch. I said ‘Hi’ to a few hikers, but said, ‘I’m going to keep going.’ They thought I was crazy because I had already hiked 29 miles that day, but I had told myself that I would hike 30 milers whenever possible and even though it was 6:30 p.m., I felt great, so I said ‘Goodbye’ and took off. These guys were a lot of fun. Ozzie is literally combing his beard. The girl with the shaved head next to him is called ‘Her Dudeness.’ They all knew each other and had caught a ton of crawdads a few hours before. They bagged them up and cooked them in pots when they got to the hostel. They were having a good time.” 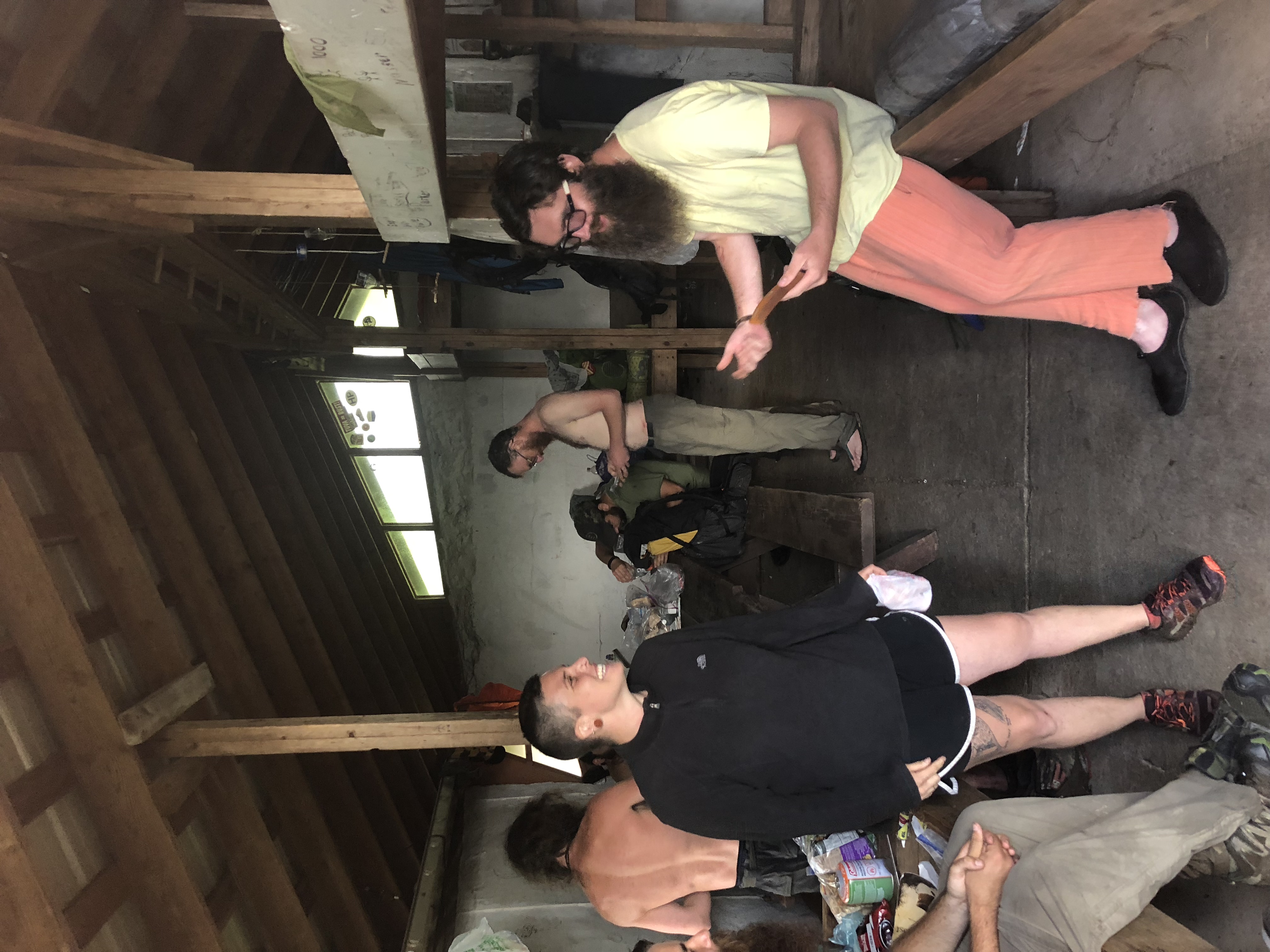 In four miles I caught a shuttle to THIS gorgeous hostel, Garden Mountain! I saved 5 dollars ($15, instead of $20) by sleeping in the barn instead of the mansion. I fell asleep with the barn door open watching fire flies! 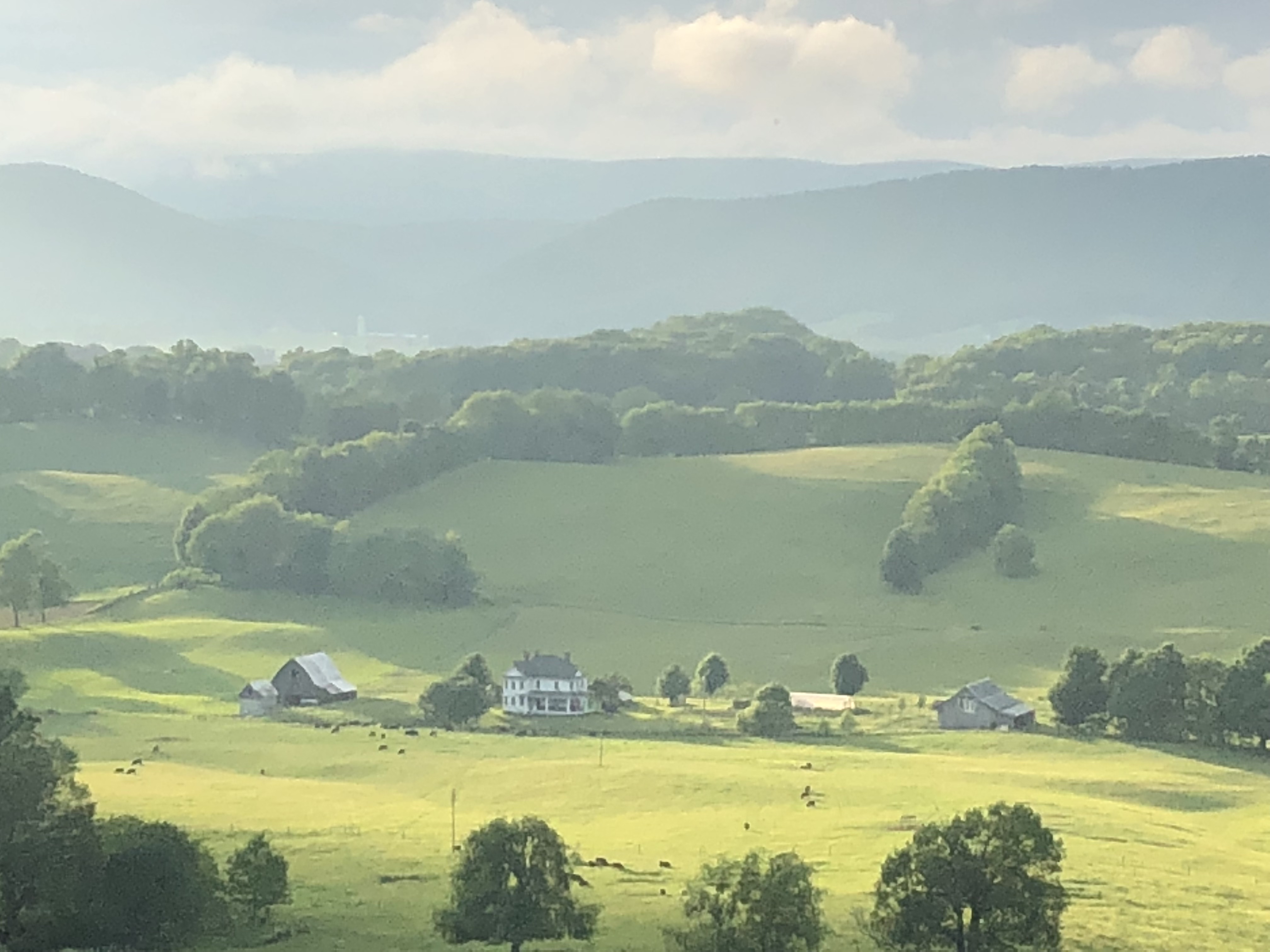 Here is really interesting lady bug. It looks like someone drew on its back with a sharpie. The bug is on someone’s sweater. 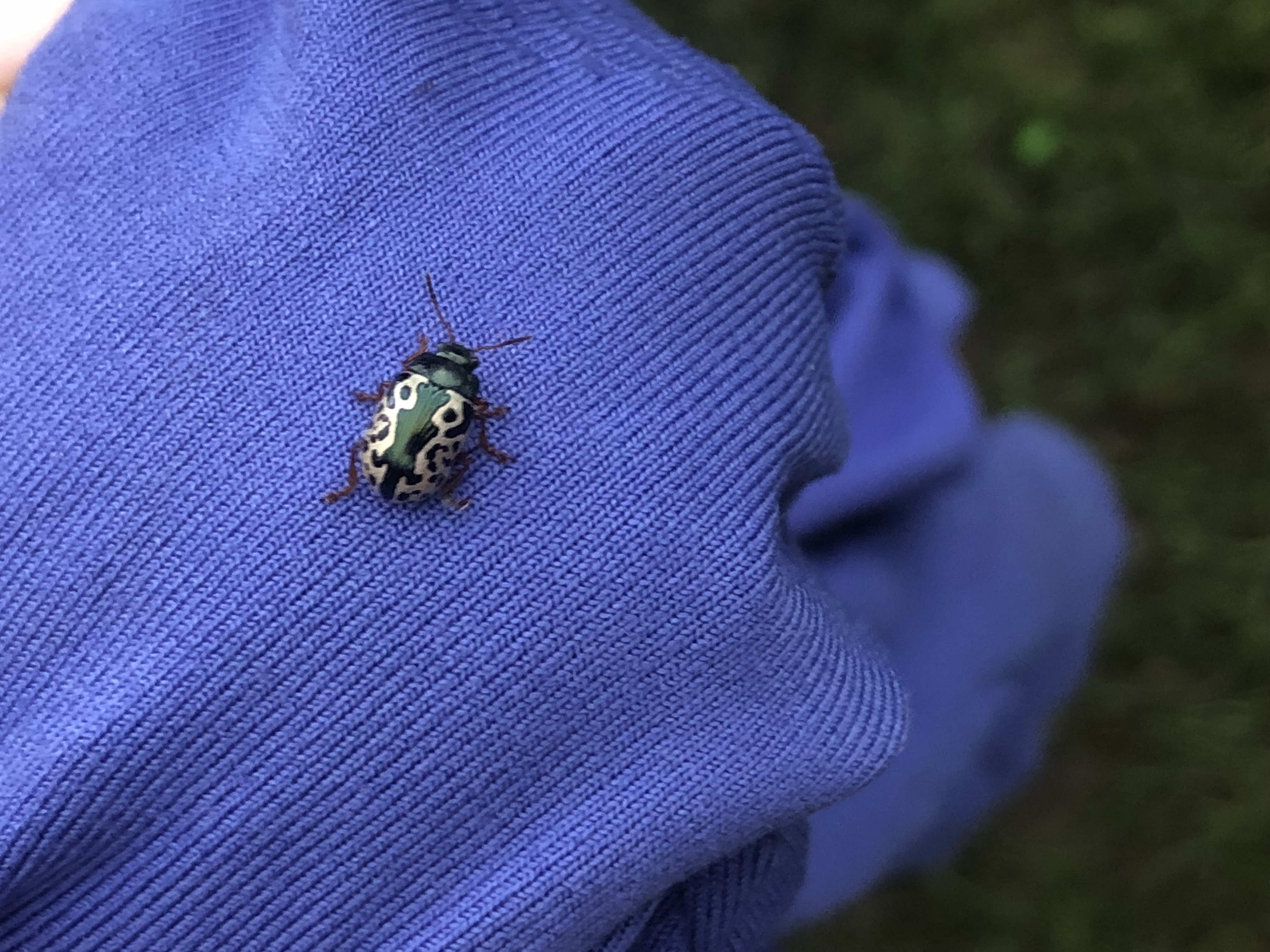 This is just out of Atkins, Virginia. That was a big day. I was up at 5:00 a.m. and got a few miles in before sunrise, which you can see coming over the hill behind this beautiful building. 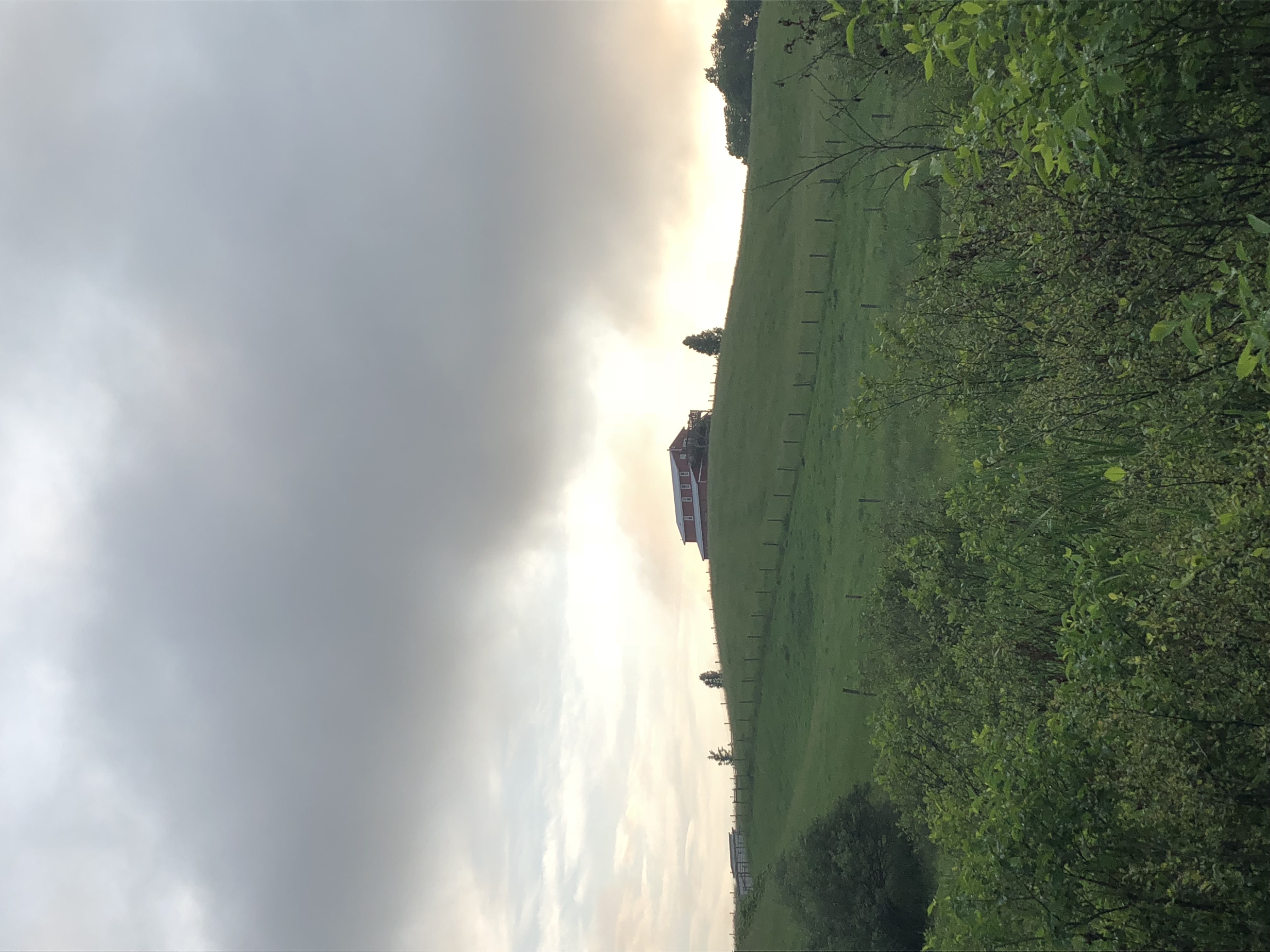 “Two days ago, while I was still coming out of norovirus, I met back up with a hiker named, ‘Short legs.’ We had eaten together earlier on the trail and he had now caught up with me. We hiked and talked throughout the day. A father and son duo named ‘Ya Ya’ and ‘Goober’ reached Dragon’s Tooth together.”

“Four miles later we hit this hostel, a families 3 car garage.” J.D. has also met lots of other COOL people including “Gramps” and “Charles” who he spoke to about religion, philosophy, technological advancements, and other “bright and insightful” things. After J.D. and Charles talked for a few hours, Charles said, “I want to send you some trail magic.” Trail magic is random acts of kindness to hikers, usually in the form of food and drinks. At a postoffice there in Daleville, Viginia he picked two packages, as planned, at the postoffice! One was the replacement pole for J.D.’s tent and the other, from Charles, WAS A ROMANIAN MANDOLIN! 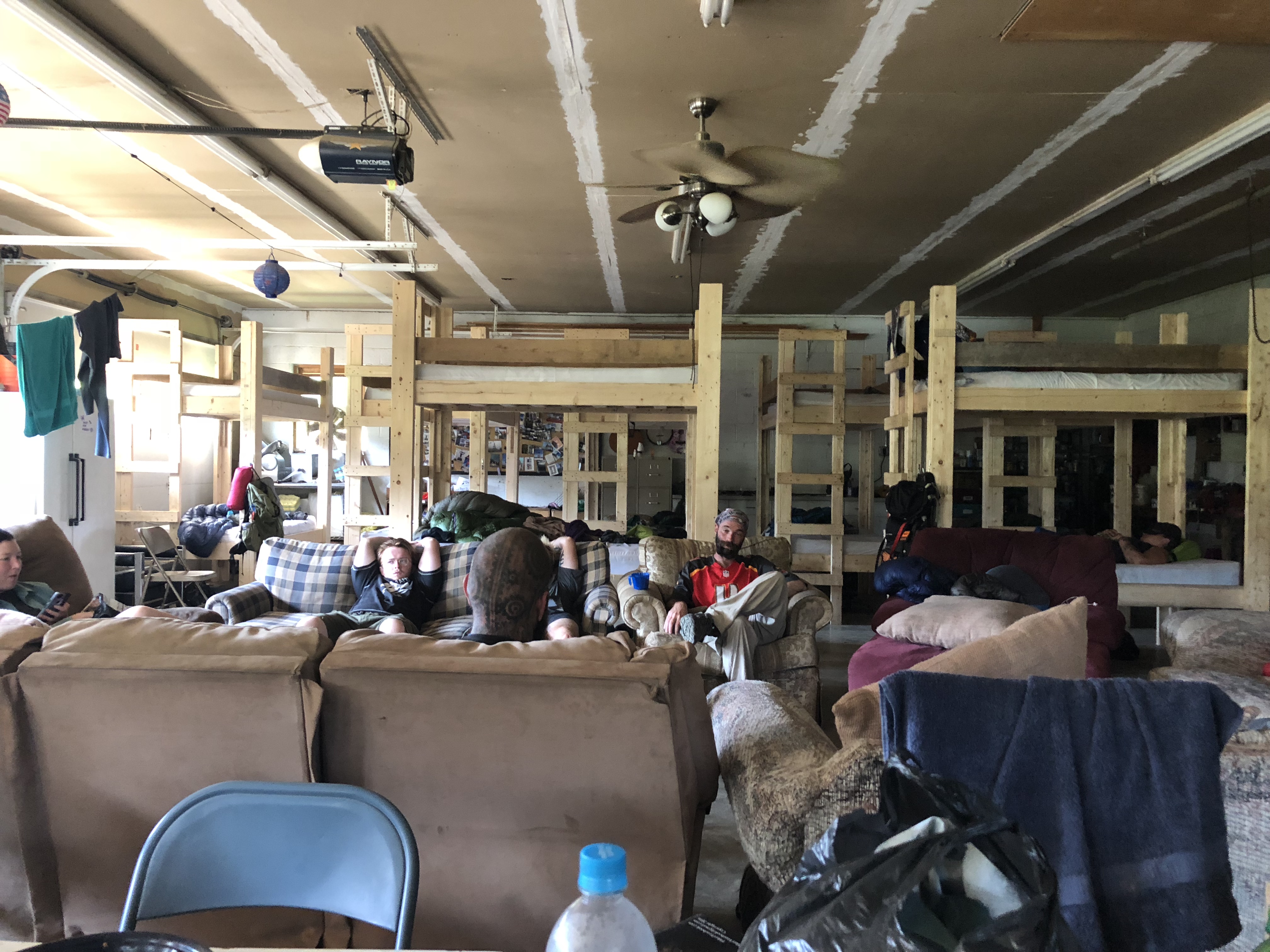 “We hung out all day to catch a famous cafe as soon as it opened at 4:00 p.m. and ate epic all you can eat southern food. ‘Short legs’ is on the right and ‘Who’ is on the left. The green beans were magical. The pinto beans were of the likes I have never tasted before. The fried chicken was the best quality!” 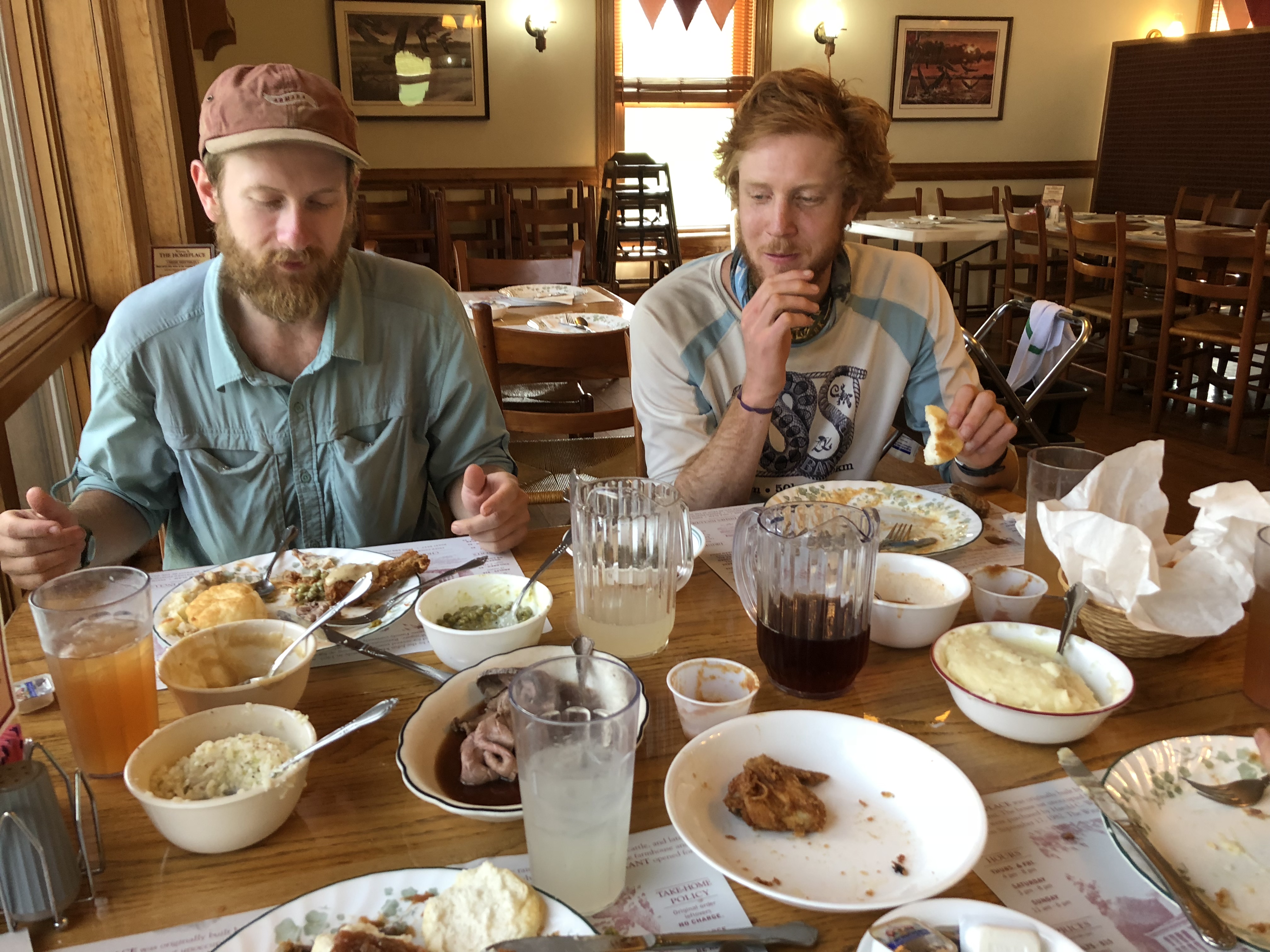 Here is “Who”‘s hilarious hitch to the restaurant! 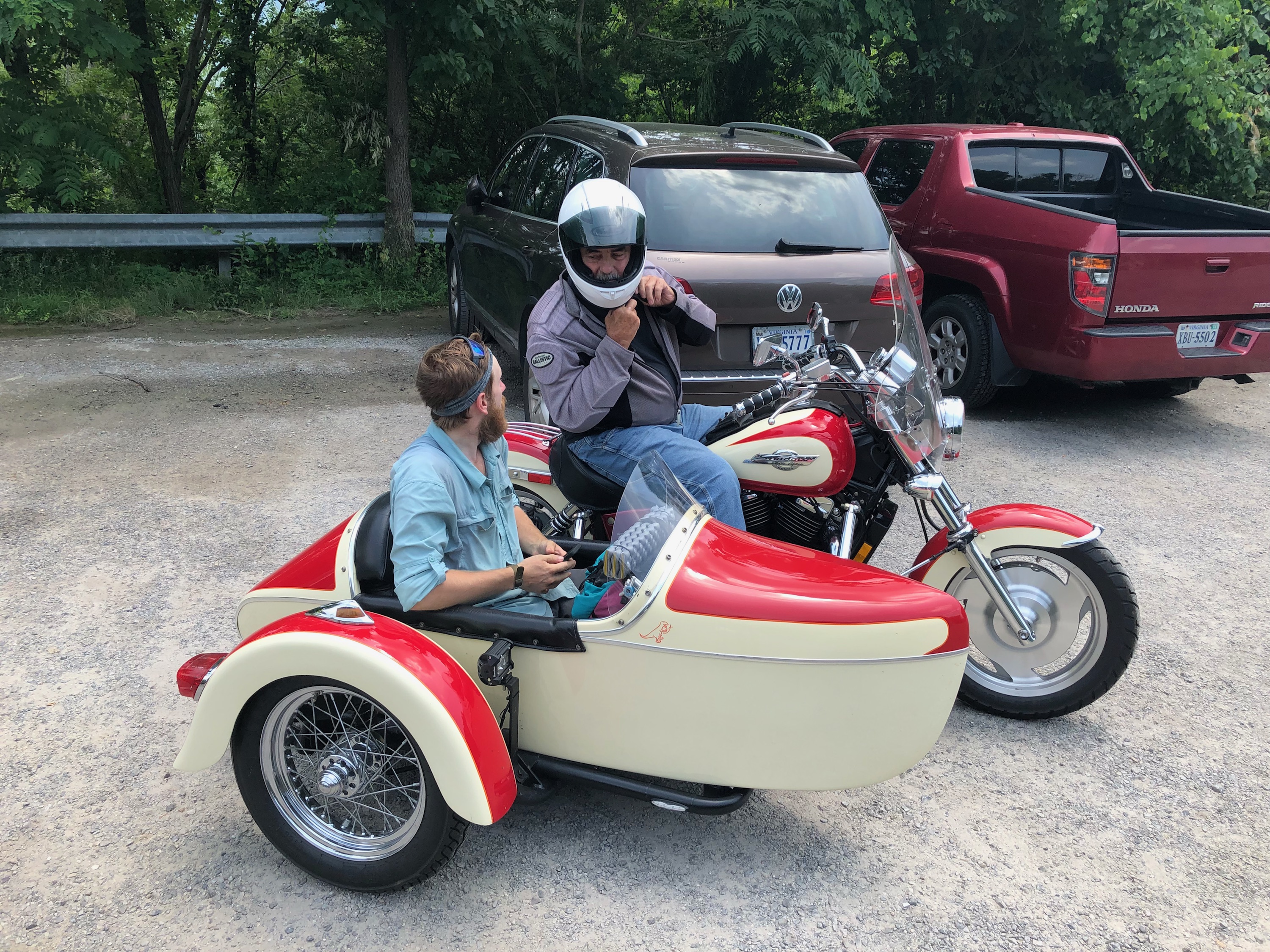 THEN we hiked with bulging stomachs to McAfee’s Knob, the most photographed spot on the entire Appalachian Trail. 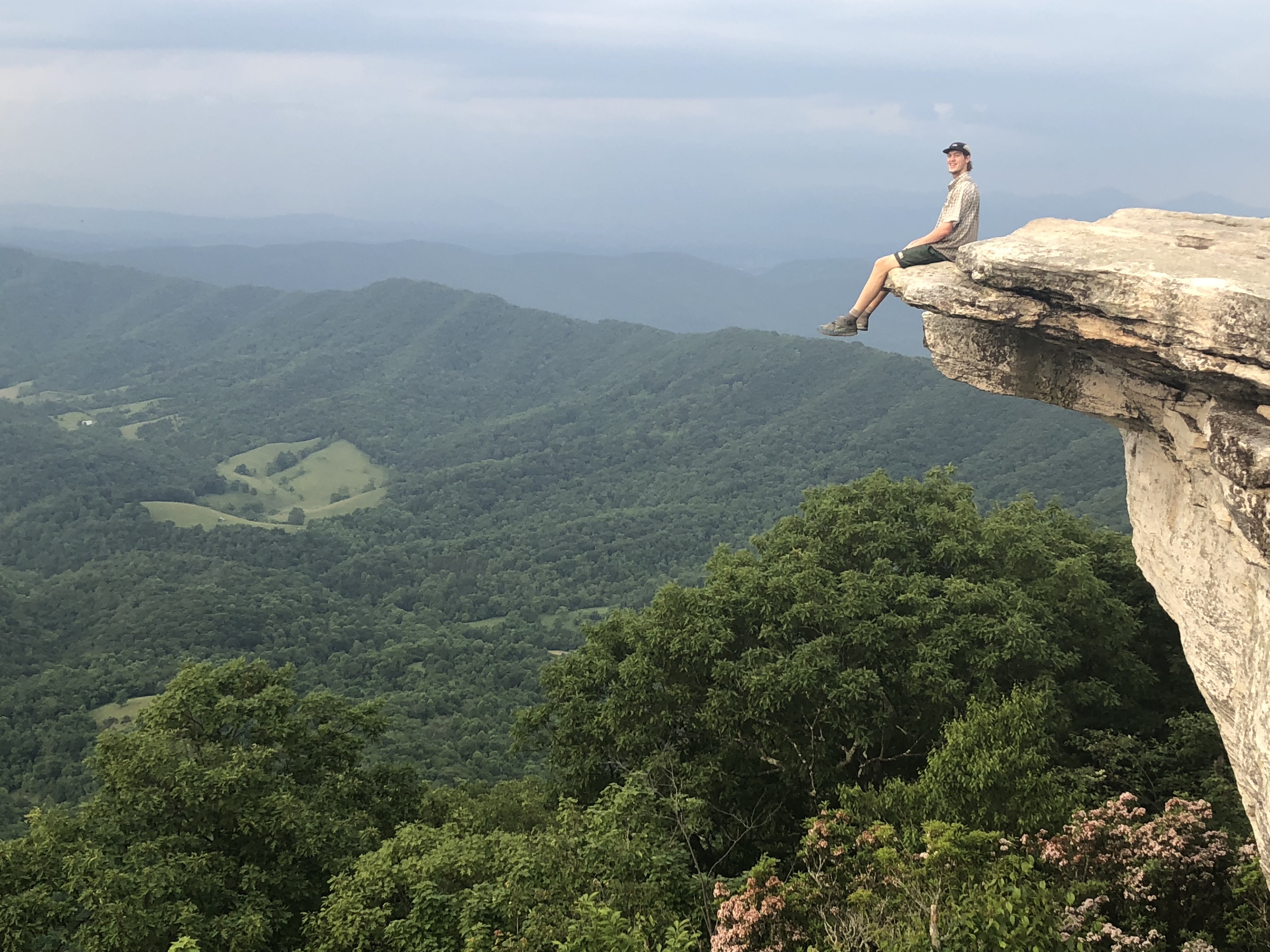 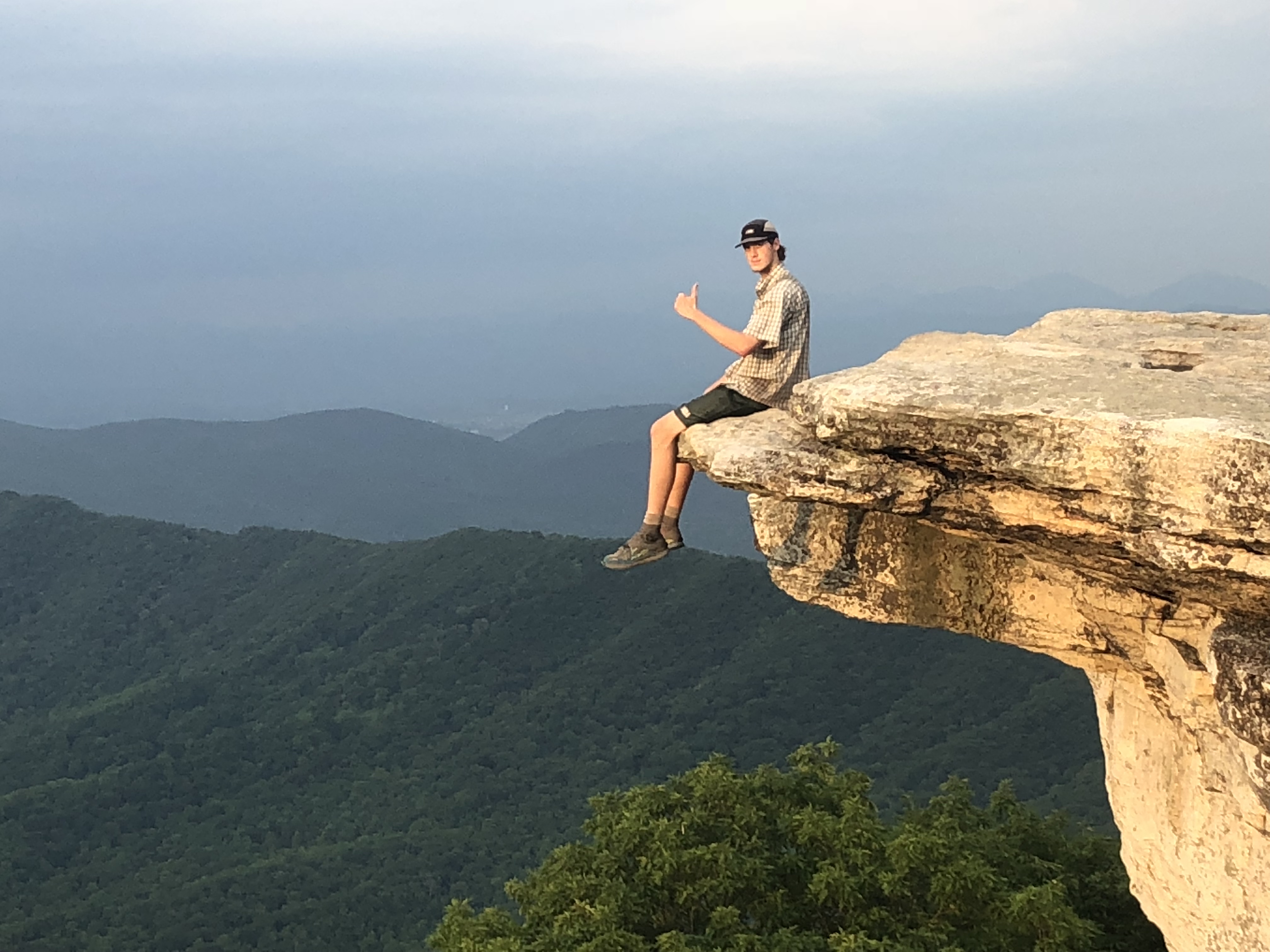 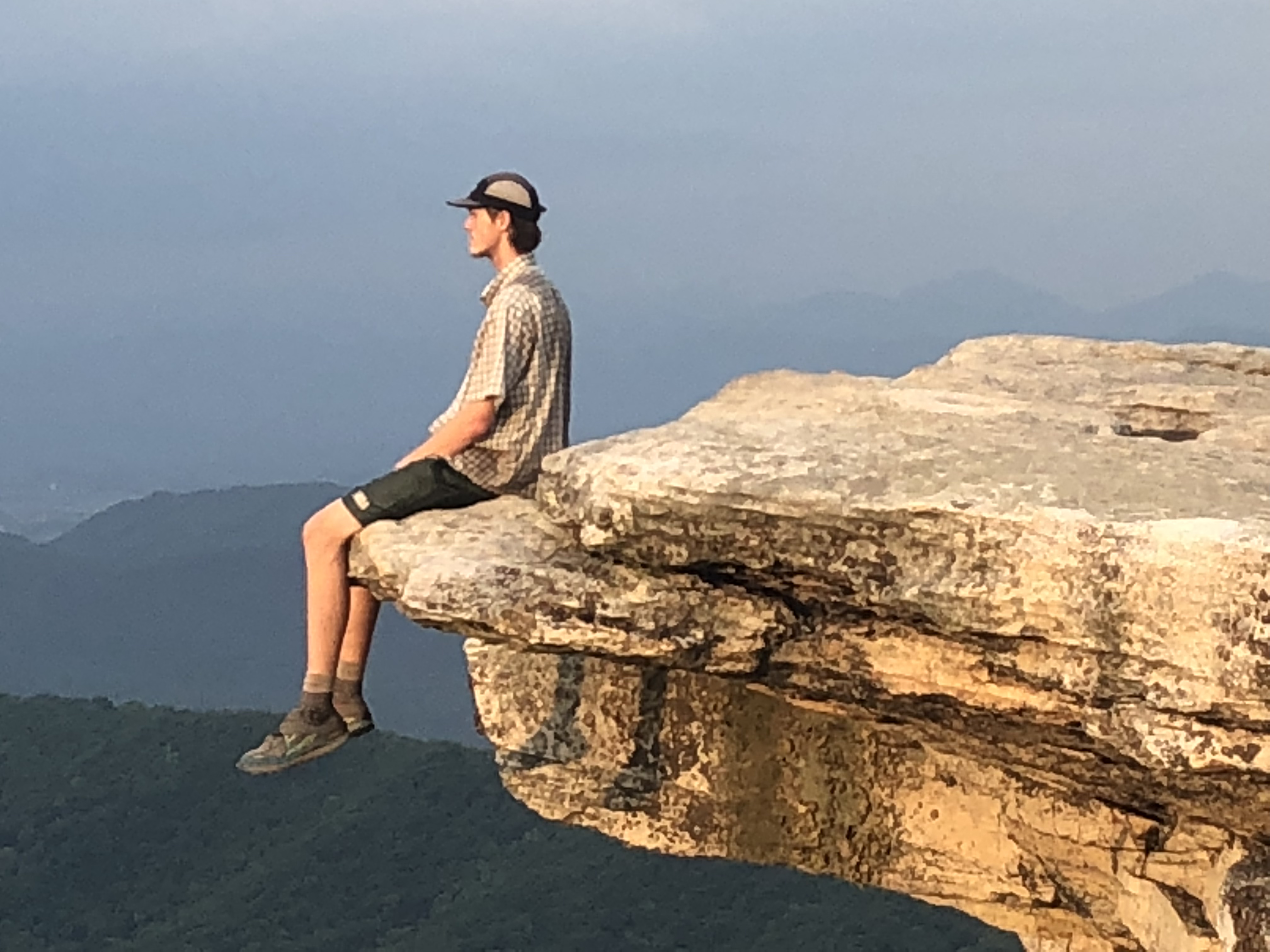 While J.D. gave me this last bit of the update he was sitting in a chair (I feel sorry for the person who buys that chair, which now must stink having held J.D.’s body in it for a few minutes. Notice he doesn’t even change his clothes from day to day.) for sale on the porch of a Kroger Grocery Store, super excited to grocery shop, but wanted to tell me the details of the last couple days. At the end of the call J.D. said to a passer by, “Hey, Nomad! What’s up?! … Mom, I gotta go.”